I have often wondered what it would have been like to experience Shakespeare in Shakespeare’s time. Until recently, I never considered that the Bard’s words would have sounded even better using their “original pronunciation.”

Thanks to the work of British father-and-son team David and Ben Crystal, we can now hear Shakespeare as the Elizabethans did.

The duo assembled a CD, released by the British Library, of Shakespeare recordings – sonnets and plays – called “Shakespeare’s Original Pronunciation.” For the first time, we can hear Shakespeare’s works as they orginally sounded 400 years ago.

A few clips I listened to weren’t as difficult to understand as I expected. There is a rawness to it but it’s decidedly Shakespeare. I would welcome a chance to sit through any Shakespeare production employing “original pronunciation,” or OP. 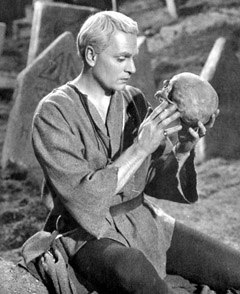 Laurence Olivier in "Hamlet": Shakespeare himself would probably prefer the Klingon version to this one.

Thanks to this research, we no long have to wonder why so many of Shakespeare’s sonnets don’t rhyme. In fact they do rhyme – or they did – until the pronunciation of the words changed. It’s not the Bard’s fault, it’s the evolution of language from Early Modern English to what exists today that’s to blame.

Lawrence Olivier, one of the 20th century’s most acclaimed Shakespearean actors, probably would have been laughed off the stage in the 1600s, as his performance would have come across as “over-acting” (even by today’s standards) compared to the slickness of the OP.

Kudos to David and Ben. They’ve opened our eyes to a whole new dimension of art preservation and appreciation.

16 thoughts on “Shakespeare like you’ve never heard it before”