I do love the Toronto Symphony Orchestra’s “pops” concerts. I was introduced to them, as many of us were, by legendary conductor Erich Kunzel, who was widely known as the “king of pops.” Although he passed away in 2009 it’s good to see the tradition he started continues here and in other cities.

Listening to a world-class orchestra playing favourite tunes from film and theatre is a great way to spend an afternoon, whether you’re a senior (the bulk of the audience) or have a child in daycare (my wife and I). 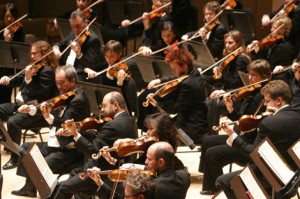 This week, guest conductor Jeff Tyzik guided us through a programme that spanned 100 years, starting with “Give My Regards to George” and ending with three numbers from Phantom of the Opera. Providing vocals were two stars from Broadway – Christiane Noll and Doug LaBrecque.

I enjoyed the whole show, but there were a few numbers that stood out, such as the medley from Showboat, selections from My Fair Lady and the West Side Story overture. But nothing topped Christiane’s rendition of Sondheim’s “Send in the Clowns,” which moved the audience – and herself – to tears.

What I looked forward to most was the medley from Andrew Lloyd Webber’s Jesus Christ Superstar, which was arranged by the great Henry Mancini. I wasn’t disappointed. It contained the main theme, as well as my two favourite songs, “Everything’s Alright” and “I Don’t Know How to Love Him.”

The music from Superstar is still fresh in my mind from last summer’s excellent Stratford Festival production, which officially opens on Broadway today. This is probably as good a time as any to wish the show’s all-Canadian cast the best of luck in the Big Apple. It’s a hit show – let’s just hope the critics see it that way.

The last pops concert of the TSO season is the “Sci-Fi Spectacular” in May and will be hosted by Star Trek‘s own Mr. Sulu (George Takei). Needless to say I already have my tickets. Do you?