You have to admire a man that can create a piece of art out of an image of his brain hemorrhage. That’s the kind of man Ai Weiwei is.

If you haven’t seen his exhibit currently on display at the Art Gallery of Ontario − entitled Ai Weiwei: According to What? − you should. Even if you’re like me and not generally a fan of “modern art,” you will be taken by this exhibit.

Ai is a rogue. He used to work for the establishment in his home country of China, co-creating the famous “Birds nest” stadium for the Beijing Olympics. Then he turned around and boycotted the games. That’s put him in a difficult position at home, but he’s standing on his principles. 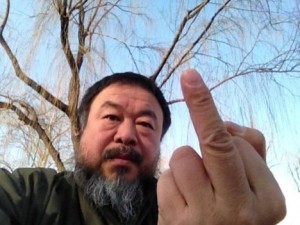 His is not a voice that’s easily silenced. Ai’s bicycle installation was the centerpiece of Toronto’s Nuit Blanche. He continues to give media interviews from his home captivity in Beijing. The AGO exhibit is doing brisk business. He will continue his crusade of making the truth known.

When the Chinese government refused to say how many children were killed in the deadly 2008 Sichuan earthquake, he did the tally himself. A wall with more than 5,000 names is one of the most moving parts of the exhibition.

One thing great artists have in common is they see things differently. Whether it’s a photo of his middle finger extended to the White House, or a bunch of bicycles connected in a circle, or tea leaves shaped into houses, his works make you stop and say: this guy is brilliant.

Check it out before it closes Oct. 27. I also highly recommend a short film showing near the entrance of the exhibit as it provides helpful context for the rest of the show.