While I don’t make it out to the movies as often as I wish, I did see a few “summer blockbusters” in the last couple of months. Some I liked and some I didn’t like. Ironically, I liked the ones I didn’t think I’d like the most. Here we go:

Iron Man 3: Let’s face it, after the disappointing second outing, the franchise had nowhere to go but up – and it did. Was the movie over the top? Yes. Way over the top. The “twist” they came up with for the villain, the Mandarin, was genius. Sure they veered from the comic books, but it was for a good reason – the story. For a superhero that was created in the 60s, this film felt very current with its parallels to today’s “war on terror” and fear mongering by the media. 4.5/5

Star Trek: Into Darkness: This was the film I was most excited about this summer and it was a huge disappointment. Sure, the special effects were great, but the story was where this movie fell apart. Only Karl Urban really gets his character (McCoy) and his screen time was far too short. I’m not sure how we’re supposed to believe Kirk would violate the Prime Directive and try to hide it from Starfleet and Spock would rat him out. When Kirk breaks the rules, he lets his bosses know! And forcing Khan into this story was a waste of Star Trek‘s greatest villains. I hope they bring a new team of writers for the next one because these guys are obviously out of ideas. They come up with this new timeline to free themselves of “canon” and then they slap the handcuffs back on. Too bad. I liked Star Trek movies better when the effects were crap but the story was good. 2/5

Man of Steel: Superman comes back to the big screen (where he belongs) and triumphs. It’s a great cast, great story (albeit one we know well), and an overall great ride. This is a very emotional film. I was close to tears on a few occasions watching the challenges Clark endured growing up and contending with his super powers. The second-half got a little carried away with the action, but Michael Shannon was brilliant as Zod, and he had big shoes to fill given Terrence Stamp’s iconic performance in Superman II. Can’t wait for the sequel! 4/5 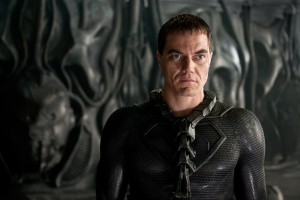 Michael Shannon had big shoes to fill portraying Zod, and he did so brilliantly. He will scare the pants off you.

The Wolverine: Again, this was a case of a franchise that had nowhere to go but up. The first was okay, but didn’t really take any chances. I was glad to see the sequel pushed the envelope in terms of character. Although I wasn’t a fan of the climax, it didn’t detract from my overall enjoyment. Bring on more X-Men and Wolvie films. 4/5

Pacific Rim: This was the biggest surprise of the summer for me. After seeing the trailer the movie didn’t appeal to me at all. But the positive reviews convinced me to go and I’m glad I did. Massive robots fighting the biggest and baddest monsters I’ve ever seen. This was a great action film WITH characters that you really come to care about. You can’t ask for more from a summer blockbuster. Tons of fun. 4/5