For David Mamet fans, Race may not be your favourite play of his, but it’s decidedly Mamet and therefore worth seeing.

I saw the Canadian Stage Company’s production in Toronto recently and, contrary to one reviewer, who called it 90 minutes of misogyny for $99, that’s absolutely ridiculous and irresponsible criticism. I didn’t find the play misogynistic nor did I pay $99 to see it. (We got tickets through Facebook for $25 plus tax – a damn good deal.)

Race is a play that has divided critics. That seems to be the effect its author has on audiences these days. I confess to loving David Mamet, his plays at least. I would put Glengarry Glen Ross on top, followed closely by Oleanna. But I can’t say I’ve seen any of his work that I didn’t enjoy in some way. He has a knack for talking about big issues in the simplest places. In Glengarry the setting is a sales office. In Oleanna a professor’s office. In Race, we’re in a law office.

The story: what is a white man to do after being accused of raping a black woman? He tries to hire a law firm run by a black man and a white man. The discussion flows from there about how to get him “off,” with unspeakable words flying across the stage to the very end. The script shocks us only because we know this is how people can really talk behind closed doors. 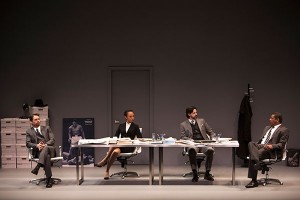 I thought all the actors were solid. Many have put down the performance of its star, Canadian Jason Priestly of Beverly Hills 90210 fame, but I thought he was extremely comfortable in the role and played it well. Perhaps the text itself affords his co-stars more memorable moments, but I think he held his own against a very strong cast.

Be warned that there is little to like in any of these characters. You may find yourself rooting for each of them at different points in the play. That’s a running theme in many Mamet texts. But we identify with them because we either know people like them or know that people like them exist. It’s an uncomfortable feeling, but one that reminds you of the power of the theatre.

It’s a short but intense 90 minute production, but one that will have you thinking about race, as well as gender, age, justice, revenge, and other themes, long after the house lights come on.

And I thought the set design was great, too. Take that Toronto Star!