Daniels Day-Lewis’s portrayal of Abraham Lincoln is the talk of moviedom right now. His Oscar chances are high and rightly so.

He has the fragile look, soothing voice, gentle mannerisms and true heart that make us believe he is Lincoln. We have no audio or video of the actual Lincoln, but if you watch how Day-Lewis handles his soft step down a hallway, you’ll swear its the iconic 16th U.S. president, or at least everything you dreamed he would be.

The movie itself is a marvelous account of the ending of slavery in the U.S. driven by Day-Lewis’s natural characterization of Lincoln. We all have an image of what Lincoln was. We know it when we see it. And it’s Day-Lewis.

While I couldn’t help but wonder about the historical accuracy of certain scenes/events, realizing this is a movie and not a documentary, I wouldn’t let a little embellishment on the director’s part detract from the film’s entertainment value. Who would have thought a House vote could elicit such drama (and a little too much melodrama)? Bravo! 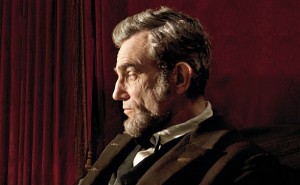 But I couldn’t help but think back to another actor’s interpretation of President Lincoln some 50 years ago. In the much-loved Star Trek episode, “The Savage Curtain,” an alien representation of Lincoln is played wonderfully by the late Lee Bergere, who had hundreds of acting credits to his name.

Bergere died in 2007, but his portrayl of Lincoln lives on and remains one of his moste memorable roles. 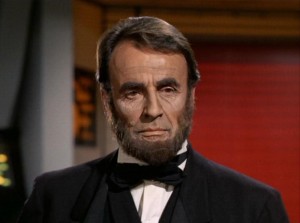 Lee Bergere as Lincoln in the Star Trek episode, “The Savage Curtain.”

When the Enterprise, travelling through deep space, welcomes aboard a man who looks like and presents himself as Abraham Lincoln, Kirk is overwhelmed. Face-to-face with his childhood hero, even though he knows it cannot possibly be the Abraham Lincoln, he extends full presidendial honours. It turns out that this “Lincoln” was created by a race called the Excalbians in an experiment about good and evil. Indeed, Lincoln was based on Kirk’s own personal and idealized image of the president.

The audience empathizes with Kirk because Bergere paints the picture of Lincoln we all imagined. He is dignified and well-spoken, but also willing to pick up a spear and fight for his own life and the lives of his comrades. Again, we know Lincoln when we see him, and I think Bergere captures the beauty of the man we all know, or think we know, as Lincoln.

Bergere was the first “Lincoln” I ever saw physically realized on film, and as excellent as Day-Lewis was in the role, there’s always something about the first.

TRIVIA: In researching past roles Bergere played, I was stunned to discover he was the man in the WPIG mascot suit on one of WKRP’s best episodes! 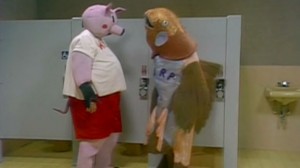 Where else would you see a pig and a carp duke it out but on “WKRP in Cincinnati.” That’s Lee Bergere in the pig suit.

2 thoughts on “A tale of two Lincolns”