Skyfall is the first James Bond film to be released in IMAX – the most spectacular movie format ever invented - and it’s about time.

Simply put, this is great Bond, start to finish.

Daniel Craig gives his best performance yet as 007. He shows all the traditional sides of the character - action hero, lover, master of sarcasm. But he also shows an emotional side. We learn more about who Bond is and where he comes from. Unlike previous Bonds, the audience can understand him on a personal level. It’s a refreshing change.

What I love most about Skyfall is that it takes the franchise in a new direction while paying tribute to its past. This Bond feels fresh and new despite several references to the past. The film doesn’t attempt to hide Bond’s 50 years of history. It draws strength from them. For anyone that’s seen even a few of the Bond films, it’s a nostalgic ride. But it doesn’t depend on nostalgia to keep the audience interested. It’s more like the cherry on top of an already fine film adventure. I can’t wait for the next one. 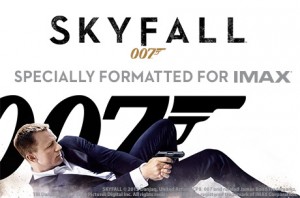 I mentioned IMAX off the top and there’s a reason for that. This film does what few IMAX Hollywood film releases have done in the past (unless they have footage filmed with IMAX cameras. It takes advantage of the full IMAX aspect ratio. Traditional IMAX screens have a square shape while conventional screens are rectangular. What happens when you put a Hollywood film on an IMAX screen? Most directors tend to “letterbox” IMAX films, which means there are large gaps of black space on the top and bottom of the screen. It still looks great, but much of the glorious IMAX screen seems wasted.

Sam Mendes, Skyfall‘s director, did a smart thing. He made the IMAX version fit the IMAX screen, and it was a wise choice. This is the way an IMAX film is meant to be presented. Other directors should watch it and see for themselves how good an IMAX film can and should look.Every scene looks awesome and immersive. You couldn’t ask for a finer debut of the Bond franchise in the IMAX format.

Let’s hope this is the start of a beautiful friendship.